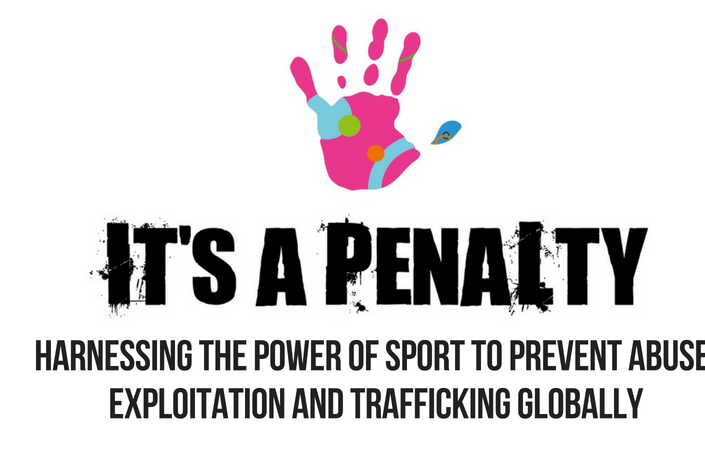 July 1 (Tokyo, JAPAN) – It’s a Penalty (London, UK) and Sport For Smile (Tokyo, JAPAN) are pleased to announce that “It’s a Penalty Tokyo Campaign” will be launched today (12:00 BST/20:00 JST) to protect children from human trafficking and exploitation. “It’s a Penalty” campaigns have been delivered during mega sports events since 2014, displaying videos and posters with high profile athletes to raise awareness of the signs of human trafficking and to encourage people to report. 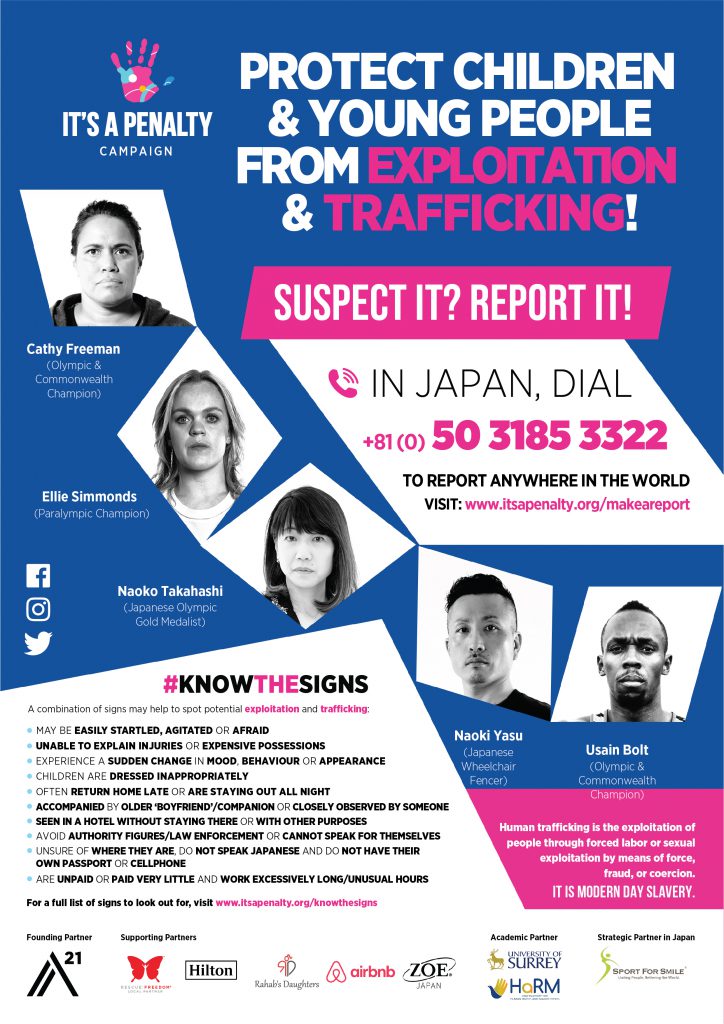 The global launch event will be held online on 1st of July at 20h00 JST (12h00 BST), and speakers include representatives from project and operations partners of IAP Tokyo Campaign, in addition to the organizers. The event can be viewed here, and the recordings will be published at a later date. The movies and posters will be globally published at the start of the event, and the messages to raise-awareness of human trafficking will be posted throughout the campaign, as well as educational materials will be distributed to Japanese schools.

It’s a Penalty Campaign has started in 2014 during the FIFA World Cup in Brazil, and at the Rio 2016 Olympic and Paralympic Games it has been implemented as the official project of the IOC as well as it worked with the Pyeongchang 2018 Olympic and Paralympic Games. While the IAP Campaigns focus on “prevention,” it also extends hands to victims of human trafficking, and at the IAP Tokyo Campaign, the calls will be taken by specialized NGOs to provide help for the survivors as well. The hotline will be succeeded local Japanese NGOs after the campaign term as a legacy of IAP Tokyo Campaign.

It’s a Penalty CEO Sarah de Carvalho commented: “With the pandemic’s impact resulting in increased risk of human trafficking and exploitation worldwide, our campaign in Tokyo this summer is more important than ever. We are delighted to be working in collaboration with the sports and travel and tourism industries, as well as local and global , NGOs, for the campaign. We’re hopeful that this campaign will raise awareness about human trafficking and exploitation, in order to have a great impact in Japan and globally.”

Sport For Smile Founder Mie Kajikawa commented: “It’s meaningful for us to serve as the Strategic Partner of the It’s a Penalty Tokyo Campaign, coordinating with all the local stakeholders including Japanese athletes, NGOs  and major transportation , and appreciate their generosity and contribution. I believe this campaign brings about positive change for Japanese society.” Mie Kajikawa, CEO.

ZOE Japan Regional Director Hiromi Hataji commented: Sadly the crime of human trafficking is happening here in Japan even these days, children are sacrificed. We share the mission of It’s a Penalty Tokyo Campaign to help children from human trafficking through the power of sports, and we appreciate the opportunity to be part of the team as a local NGO to assist in its operations.!

KEY HUMAN-TRAFFICKING & EXPLOITATION STATISTICS
•24.9 million people are being trafficked and exploited around the world (ILO, 2017)
•1/3 of detected trafficking victims are children (UNODC, 2021)
•At any given time, there are an estimated 37,000 people living in conditions of modern slavery in Japan. (Global Slavery Index, 2018)
•In 2020, more than 5100 cases of commercial sexual exploitation of children were reported to Japanese law enforcement (National Police Agency, Japan).

About It’s a Penalty:

About Sport For Smile:

Sport For Smile is the first-ever platform in Japan to use sport for social change, and it aims to deliver the power of sport to the people in the most need, collaborating UN and World Bank, as well as being funded by FIFA’s official NGO partner, with advisors as Ashoka and Schwab Fellows and globally recognized social activists. In 2019, Sport For Smile received HEROs Award with its Sports Mentoring program.

ZOE Japan supports the global mission based upon the Christian values in the prevention, rescue, and rehabilitation of children in vulnerable situations who are sold or at risk of being sold into bonded labor, prostitution, or traffic in internal organs, and provides resources to bring hope and a good future.

[Co-organizer of the Project]
Sport For Smile: (Email) iap2020@sport4smile.com